About 60 high school students from the Denver metro area converged on Five Points recently. It wasn’t a field trip. They had serious work to do. The teens were tasked with working on case studies, analyze ideas to illustrate a thesis or principle which includedreviewing course readings, discussions, conducting outside research around space, budget, and potential political climate. Then they worked on possible solutions or changes needed on various buildings and structures anddesign and integrate the community and bring diverse residents and businesses together in Five Points. It was all part of a program called NEXUS.

“I was impressed how engaged the students were and how serious they took it,” said Dr. Ryan Ross, one of the presenters,CEO of the Urban Leadership Foundation of Colorado, and Five Points Development Corporation Business Development Manager.

After a tour of the neighborhood they were shown the Five Points Plaza where they got a chance to share their ideas on how they would develop the parking lot.

Norm Harris, long time Five Points resident and entrepreneur, Dr. Ryan Ross, CEO of the Urban Leadership Foundation, both members of the Five Points Development Corporation, and Colorado State Representative James Coleman, were among the presenters who talked with the young people about the importance of civic engagement and responsible development. 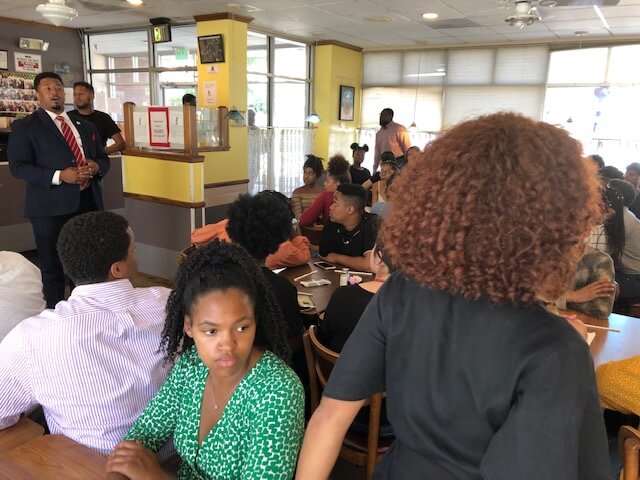 The students learned about redlining, a practice which restricted African Americans (and other people of color) from living in certain neighborhoods in Denver and across the country.

NEXUS is nationwide program, but this summer was the first time it was held in Five Points.

“The Five Points Development Corporation is one of the few organizations that understands the importance of engaging our community in development. Developer is a bad word these days.” “We’re putting a different face to developer (we’re Black), and we care, we’re invested,” explained Norm Harris.