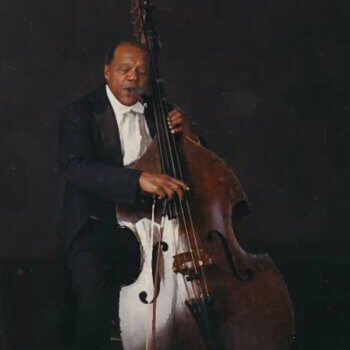 The twinkle in his eye and his 500 watt smile make you believe that Charles Burrell hasn’t aged at all. But, of course, like all of us, he has. He’ll turn 99 this week. But his spirit hasn’t aged. His charismatic personality is still that of the 29 year old who broke the color barrier in 1949 at the then-Denver Symphony Orchestra.

Burrell was the first African-American to receive a permanent contract with a major American symphony and is often referred to as “the Jackie Robinson of Classical Music.”

He is a world renown accomplished bassist in both classical and jazz music.

And he is the last known living musician to have played at the Rossonian Hotel. At the historic building in the heart of the Five Points neighborhood he performed with other jazz greats like Billy Holiday. In fact, he loves telling the story of when he performed with Holiday at the Rossonian. He says he nearly fainted when she stared into his eyes as she sang her hit “Them There Eyes.”

In 1959, Burrell left the Mile High City and headed to San Francisco where he was soon hired by the San Francisco Symphony. He was the first African American to play with that symphony as well. He eventually got a chance to perform Tchaikovsky’s 4th Symphony which had been his dream since he was 12 years old when he first heard it on his radio.

After five-and-a-half years with the San Francisco Symphony, Burrell returned to Denver and embarked on a 30-year tenure with the Denver Symphony, retiring in 1999 at the age of 79.

I’m proud to call Charles my friend. He’s talented beyond belief. And still incredibly charming at the age of 99. His birthday is October 4thand on that day the Colorado Symphony Orchestra will celebrate his him during their performance of Tchaikovsky’s 4thSymphony, commemorating the 70thanniversary of his debut.

Check out this rough cut of a trailer for a documentary on Charles Burrell.